Are Virtual Teams the Next Revolution of Work? 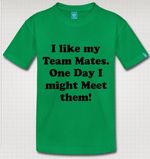 Virtual teams may well be the next step-change in the evolution of work. So it is interesting to ask if today’s management principles and processes are optimized to support them? To help answer this question let’s take an illustrated tour of work through the ages and also review how management has progressed along the way.

Work patterns have evolved through revolutionary and evolutionary waves. Some have brought major, irreversible shifts; others step-changes and refinements. Tens of thousands of years ago population densities were generally low as people worked at farming, fishing and still some hunting and gathering. You needed space to do this and too much local human competition was not helpful. Then, as crafts, trading and specializations emerged towns became useful hubs for exchanges and population patterns changed. Access to fresh food sources was still a major concern, but trading and money allowed for easier centralized living.

These were slow, likely imperceptible advances, quite unlike what happened next with the Industrial Revolution of the 1800’s. People were needed to work in factories and a major migration from rural to city living occurred within decades. Factory funded schools began focusing on time keeping, discipline and following instructions to better condition children as future workers. The Victorian work ethic promoted by many leading entrepreneurs was a useful conditioner for taking farmers, who were used to working following the daylight hours and seasons, and adapt them to a regular 7:00am to 7:00pm work days favored by factory owners.

How industry shaped cities is also an interesting topic. Steam engines where large machines that could only transmit power via shafts and belts over relatively short distances.  So early factories were tall, square buildings to maximize machine capacity within close reach of the steam engine. Electrification made power easy to transfer and factories became long, low structures that were cheaper to build and required less lifting of materials. As work patterns evolved so too did our industrial complexes from tall to sprawling.

Shown below is a picture of the moving production line at Henry Ford’s Piquette plant completed in December 1913.  This approach to manufacturing, generally known as progressive assembly, heralded a major increase in productivity that was adopted by most manufacturing industries. It was inspired by the time-in-motion studies done at the Bethlehem steel plant by Fredrick Taylor which showed increases in efficiency for specialized labor. Ford was the first to employ moving production lines and specialized labor on a large scale to increase productivity and drive down costs. 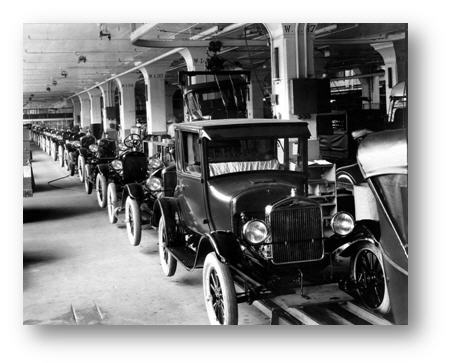 The next photo shows the Tesla production facility at Freemont California. 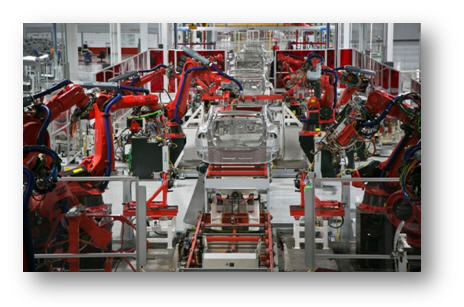 The Tesla factory has a rich history of manufacturing and management evolution. Starting out as a General Motors Freemont Assembly plant in the 1960s it embodied the modern interpretation of production line thinking. A downside of working in a specialized labor role in a highly mechanized environment can be a feeling of being a machine yourself and the plant suffered many worker disputes and union clashes during the 1970’s and 80’s. There were reports of deliberate protests and cars being sent out with Coke bottles in the doors to rattle and annoy customers.

Relations broke down and the plant was closed in 1982 only to be reopened in 1984 as a joint Toyota / General Motors plant known as New United Motor Manufacturing Inc (NUMMI), rehiring many of the same disgruntled workers. Toyota introduced lean manufacturing processes including respect for staff and empowered workers to stop the line if problems were encountered. The Japanese / American relations during these transition years created many stories and was the motivation for the comedy movie “Gung Ho” that Toyota later used in training sessions of how not to motivate American workers.

The switch from traditional manufacturing using production lines and large inventories of materials and sub assemblies to lean, just in time (JIT) production systems was driven by new philosophies of management. Lean and JIT techniques follows the work of James Womack, Peter Senge and Eli Goldratt who reposition management from schedulers and task masters to identifiers and removers of impediments to workers. They encourage and reward team problem solving and promote continuous improvement.

As capitalism and the pursuit of labor cost reduction continued, many manufacturing plants moved to cheaper labor markets. North American and other previously industry focused countries saw a rapid drop in local production. In their place however we saw an increase in design, finance, research, health and education services. This was the birth of what Peter Drucker called the Knowledge Worker – professionals with subject matter expertise that work together to solve new or novel problems.

These three big shifts in work are shown below:

In 2009 the joint venture between GM and Toyota at the NUMMI plant ended and neither company could find a suitable use for it. In 2010 Tesla, then a startup Electric Vehicle research and development company struck a deal with Toyota and bought the 380 acre site previously valued at $1Billion for just $42M. Toyota also invested $20M in stock of Telsa and some of the Toyota staff were rehired as more traditional industrial work gave way to newer exploratory knowledge work.

Agile methods are very effective for knowledge worker projects. They provide Sense-Making activities for gaining consensus from diverse stakeholders during the early stages of projects where uncertainty is high. They also provide tools like short iterations of build / feedback cycles to help reduce risk, prove approaches, and surface deficiencies in designs when tackling novel problems or using new technologies. Finally, they have process adaptation and goal seeking reviews built into their operation that helps teams refine their approaches and work more effectively.

Yet the changes have not stopped. Now with the widespread adoption of email, video conferencing, real-time chat and an emerging workforce who “grew-up-digital” and fully embrace these technologies, virtual teams are poised to revolutionize work once again. We just discussed the car industry, but it is telling that for the first time ever fewer teenagers who are becoming eligible to drive are buying cars, the cost of ownership is perceived as too high, but don’t try and take away their smart phones! Maybe since communications are so easy and prevalent, texting your friend is easier than driving to see them?

One thing for sure is that talent is distributed and technologies for finding and linking teams is improving rapidly. If I want a logo designed or web site built I can log onto a freelance site like Guru.com or Elance.com and access a global marketplace of talent showing examples of their work and hourly rates. Escrow services exist to ensure work and payments occur fairly and help with arbitration if the need arises. Or, if I want a custom door handle or even a titanium bicycle I can download the design and print it in my home or at a local 3D Printing shop.

What these technologies mean to how we work and live in the future remains to be seen. Alvin Toffler wrote about the “Electronic Cottage” in his 1984 book The Third Wave that describes people living where they want in a future paperless society and communicating electronically. Many of the technologies we need for wide scale virtual teams working are in place but we need to overcome the C.U.T.E. problems:

The building blocks of each solution are already available. Video conferencing with real time translation, peer based endorsement networks, community voting, and bitcoins all might play a role. However what about our project management tools? Where do Microsoft Project plans, PMBOK Guides and Stage Gates fit travelling at the speed of trust?

In a poetic twist of fate, just as Victorian classrooms were engineered to condition children to the discipline of working in textile factories, maybe the Instagram, Facebook and text messages of today’s school children will shape the workforce and workplace of our future. Using these tools and their replacements, virtual teams will be the norm, today’s CUTE problems will be overcome and a new era of work practices introduced. If the past is anything to go by these changes can happen quickly so we should keep our eyes and options open!

[Note: This article was written by Mike Griffiths and first appeared on ProjectManagement.com here]