Home Archives Profile Subscribe About
Periodic Table of Agile Adoption
Money For Nothing, PDUs For Free

Agile as a Solution for "Miscalibration Errors" 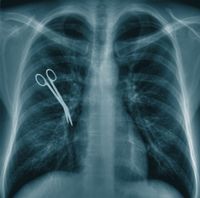 Malcolm Gladwell (author of Blink and Tipping Point) was in town a couple of weeks ago and I enjoyed a great presentation he gave on what happens when we think we have complete information on a subject.

The Problem
Gladwell asserts that the global economic crisis was largely caused by “Miscalibration Errors”. These are errors made by leaders who become over confident due to reliance on information. Those in charge of the major banks were smart, professional, and respected people at the top of their game; who, as it turns out, are prime candidates from miscalibration errors.

Think of the global economic crisis where bank CEOs were seemingly in denial of the impending collapse of the sub-prime mortgage market. (I don’t mean close to the end when they were secretly betting against the market while still recommending products to their clients, but earlier on when they were happy to bet their own firms on “AAA” rated derivatives that they knew were really just a collection of highly suspect subprime mortgages.)

Anyway, this phenomenon of educated, well informed leaders making rare, but catastrophic errors is not new and unlikely to go away soon, it seems to be a baked-in human flaw. When presented with increasing levels of information our perception of judgement accuracy increases when in reality their judgement may be very suspect. Let’s look at some examples:

The same psychiatrists were then given one page of notes about the patient and the process repeated. Their confidence in their diagnosis increased to 40% even though their success rates stayed pretty close to 25%. Each time more information was provided about the patient, 10 pages, and then their whole file, their confidence increased to 70% and 90% while their diagnosis accuracy crept up from 25%, to 27%, and eventually 29%. Now we have a dangerous position, highly skilled, respected professionals, at the top of their game, with few people to question them, highly confident of their flawed opinion.

As Gladwell was outlining this situation I thought about my time spent planning and scheduling traditional projects, before transitioning to agile. Scope was defined, detailed requirement documents created, estimates created and vetted by skilled teams and correlated with several different estimation approaches. With increasing data, rigour, and the application of software engineering best practice, my confidence in the plan increased. The plan that is so carefully crafted, resource levelled, with every known risks balanced with contingency; so that  even if the unexpected happens we had a plan for that, we must be prepared and positioned for success.

This was a classic miscalibration error, with increasing levels of information leading to overconfidence regarding an inherently unknowable domain (custom software development) that inevitably leads to the occasional failure or major project issue.

Specifications are another area prone to miscalibration errors too. When we spend a lot of time gathering specifications, validating specifications and elaborating alternative flows and exceptions we build a sense of confidence in them.  Early in my career I worked on military software development where we used formal specification languages like “Z” and “OBJ”. These specifications were machine readable and machine checkable. By writing very tight, well defined specs where any omissions would be caught and traceability from requirement to feature to test was assured, we thought we had our bases covered. Yet unforeseen problems still occurred.

The Solution
Gladwell suggested ”frequent checkpoints with reality” as a solution for miscalibration errors. Rather than allowing ourselves to build on top of premises, plans and specifications, force a verification step. With a financial derivative this may mean assessing the risk of each component and comparing risks – a complicated process in the financial crisis as the documentary “Inside Job” reveals. However for project managers agile provides many opportunities.

The iteration demos and team velocity have a sobering impact of grandiose project plans. Yes, we may have planned to be at point “X” in the project by now, but if the business has only accepted functionality “Y” and the team velocity averages 10 widgets per month, then this is the reality we need to live with.

Likewise for specifications, they are at best today’s reasoned guess at what is required, but usage reveals true requirements. Rather than months cataloguing features we think are important, greater value can be extracted from a balance of specification and evaluation.

Misscalibration errors are especially difficult to catch because they are made by domain experts who are hard to argue with. Question the BA team on the specification and they can bury you in details about processes followed, checks and balances used, and customer signatures. Question the PM on a project plan and the same happens, every best practice can be followed, people can be consulted, all of which builds a sense of stakeholder confidence, yet the risks are there.

The more information we gather the more we increase our internal perception of certainty or diagnosis. Frequent checkpoints with reality can be humbling as we surface small, iteration-long miscalibration errors, but these are typically survivable and critical for avoiding larger project-based miscalibration errors that can be fatal.

Good camparison of an expert Psychiatrist with an expert Project Manager.
Both can be bogged dwon with excess information and overconfidence.

The beauty of small iterations in Agile is to take a small step and check(via demo to clients) if you are going in the right direction. It gives you flexibility and agility to adapt to the changing business requirements.

In one sentence, "Bigger Risks are broken down to Smaller Risks which are easy to deal with".

Thanks Mike for sharing the great interesting post. A project manager should read to know a PM traits. Agile development is doing work in very small chunks to eliminate all errors, unnecessary resources and make the process development simple and easy.