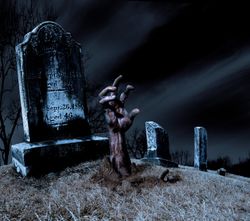 Zombies and Project Managers; to many people the images are synonymous, fools blindly shuffling from one goal to the next. Not too smart, but a major annoyance if you are trying to get somewhere, or get something done.

Yet, as a project manager I have a weakness for zombie films, they appeal to my inner urge to cut down those who impede progress or just don’t get it. I know you can not really do that, and these feelings are more likely a reflection on my inability to communicate effectively, but none the less, a socially acceptable demographic for outpourings of frustration seems to have wide appeal, and box office success.

So, other than some people thinking project managers are lumbering dullards, and this one occasionally thinking of chainsaws, what does the film Zombieland and project management have in common?

• The Insecurity Complex
• The Goal Obsession

In the film comedy Zombieland two mismatched characters team up to survive zombie attacks, find love and pursue a goal. Our hero is Columbus, a socially awkward young man who’s obsessions and aversions in normal life had made him a lonely misfit, now keep him alive in a time when most people have succumbed to zombies. His partner is Tallahassee a hard hitting, shoot first ask questions later, type guy who is driven by an overwhelming desire to find the world’s remaining supply of “Twinkie” cakes.

An Insecurity Complex is a common feeling for new project managers. Linda Hill describes it well in her book “On Becoming a Manager”. She explains how people who did well in technical and sales roles often struggle and experience “Self-Doubt” when first in a management position.

Moving from technical work to management work, project managers soon realize they have lots to learn about managing people. Managing is simply not doing more of the work they did as producers. The transition shows that they lack much of the required knowledge and many skills that effective mangers need. Worst still, behaviours and attitudes that had been assets (such as a hands-on aggressive approach and reliance on immediate feedback and reward) are now liabilities. Slowly but surely they see each unnerving revelation, and they ask themselves how they could ever succeed?

They like managerial work less than they expected. It seems who they were was the antithesis of who they need to be now and they simply do not have the competencies they need to be managers. So, as they begin to appreciate what it means to be a manager of people; their performance anxiety grows.

This is nothing new, most people making the transition from technical work to a managerial role go through these pains, but often on their own, not knowing it is a natural progression. So for many the promotion to management startles the managers into facing themselves and coming to grips with their own limitations. They have to confront unpleasant realities about themselves as they received feedback from others about how they were perceived.

This whole story is nicely summarized in the film as Columbus has to overcome his phobia of clowns and his rule of “playing it safe” in order to rescue the girl.

In the film, set in post-apocalyptic America, there is a dwindling supply of processed food and sidekick Tallahassee is driven only by the search for Twinkie snacks. The single minded pursuit of a goal is another common trait, and in fact flaw, in project managers.

“When the project is done, that’s when we can celebrate!” is a mindset shared by many project managers. However it is short sighted and actually counter-productive. Yes, we need an end goal, but we should not focus only on that point. Instead we need to recognize people and contributions throughout the project. Celebrations only at the end are too little, too late that will likely never occur unless we do more through the project. We need to build a sense of momentum into the team by regular recognition so that when they encounter a problem on the project they have the energy to push it to one side or go around it. People left without regular recognition will become disheartened and listless (like zombies in a vegetarian store.)

As Victoria Sandvig, of Charles Schwab says:  “Ceremonies, celebrations, and rituals are not about the event. They’re about touching the hearts and souls of every employee.”  We need to celebrate achievements frequently to keep people energized. When my current project (a project restart) reached 25% complete we took the team out and gave them a newly minted 25 cent coin in a thank you card to mark the quarter way point. The gift may be trivial, but the action and recognition was very deliberate.

Anyway, go out and see Zombieland if you like gore and deadpan humour. Heck, expense it as project management training or take the team! It contains some great project analogies and can be watched on many levels, but is best viewed with you brain left at the door, but no, wait, what about those zombies!

I've really got to see that movie. And just in case a zombie apocalypse occurs, I have my ninja sword handy. And no, I'm not kidding.

A great post. I've seen many highly technical folks fail at management for the reasons that you mention, but also because they don't want to be a manager. The story is familiar in the startup world, where a technical founder flounders as a CEO. Once they take on the CTO position and hire a new CEO, the business kicks into high gear.

Before promoting someone to management be sure that's a move they really want to make.

I am Yousuf Siddiqui and I provide coaching to leaders and organizations.
I refer to my work as Business Performance Coaching. I increase my clients' effectiveness by thinking through their most burning issues with them and creating plans to get tangible, measurable and specific results.

I want to connect with you and follow you on your blog. I hope to learn from you and exchange thoughts with you.

As Dr. Laurence J. Peter and Raymond Hull state in their 1969 book "The Peter Principle" ... "In a Hierarchy Every Employee Tends to Rise to His Level of Incompetence.". A whole organization filled with Zombies?

I believe too many technical professionals are promoted to project manager roles simply on the basis of their technical expertise. Perhaps the organization and the newly positioned project manager both stand to lose. Many organizations still don't appreciate that project management is a distinct skillset - and different from programming, database design or even business analysis.

The points about goal obsession are all too true. Another problem I have personally experienced is that the end goal is often perceived to be too early. Project success is about so much more than the big "rollout". It is about follow-through with change management plans, adoption and realization of business benefits. This requires patience and diligence.

I really like this idea that “Ceremonies, celebrations, and rituals are not about the event. They’re about touching the hearts and souls of every employee.”

Would be interesting to ask ourselves after every such event if we connected? Or just "checked the box" ...

Zombieland is pretty hilarious but good

nice point re end of project celebrations. Often a milestone celebration or praise can be alot more welcome AND motivating than one at the end.

I really like your ideas about project managment
sara http://becomacademy.com/pmp