The current Project Management Body Of Knowledge (PMBOK) Guide is labeled “Third Edition” and was published in 2004. Every 4 years the Project Management Institute (PMI) brings out a new version and the Fourth Edition has just been released to reviewers in Exposure Draft format.

I was a contributor and reviewer for version 3 and will likely submit some feedback for version 4 too. One thing that will be of interest to agile project managers is the increased acceptance of iterative lifecycles.

The concepts of rolling wave planning and progressive elaboration have been in the PMBOK since at least the 2000 edition that I know of. These concepts address the idea that planning near term work in detail and later work in less detail. Then as new details emerge, going back to the plans and updating them with the new data. This is common sense to those in the agile community, but it sometimes surprises people that it has been in the PMBOK for the last 8 years since, unfortunately, many people skim past these important principles in the PMBOK Guide.

Likewise, previous versions of the PMBOK have mentioned alternative lifecycles and nesting of activities. Yet with the PMBOK v 4 draft we start to see more embodiment of iterative approaches.

Other lifecycle examples include:

Skeptics may see these as multiple waterfalls, but I see this as more ammunition to argue how agile projects meet the recommendations outlined by the PMI and used by most Project Management Offices.

If you glue enough of these diagrams together and interpret the interim Closing Processes and Initiating Processes as your retrospectives, adaptation and re-planning work then the models align well. Repeated cycles of Planning, Doing, and Acting on the results; heck it even has little cycle arrows in there!

Shoehorning in lifecycle models is not my goal, I have never had an issue with disconnects between the PMBOK and agile lifecycles. Nowhere in the PMBOK does it prescribe a single pass waterfall approach and the established principles of progressive elaboration and rolling wave planning have always supported adaptation.

However and here is the significant part, people really latch onto diagrams. When Winston Royce’s published his waterfall paper of 1970 he accompanied it had lots of wise advice about feedback loops and running through the lifecycle at least twice since we are bound for miss things the first time. Yet many people did not read past the first waterfall diagram. They had their lifecycle and were all set to go with a single pass waterfall model (along with all the challenges it brought.) So, I am hoping that having some iterative based images in the PMBOK should help those of us arguing the case of agile adoption in PMBOK focused organizations. A picture is worth more than a thousand words if people don't read the words.

Overall, the PMBOK v4 Guide has some welcome new additions. The Power/Interest grid from chapter 10 on Communications Management caught my eye. It addresses how different stakeholders have varying degrees of interest and influence on projects and recommends management strategies for the major categories. I think they are a little passive, for example I would prefer to convert the High Interest / Low Power members of the lower right quadrant into “Project Champions” or “Advocates” rather than the “Keep Informed” status recommended.

My recommendations for these groups are shown below. 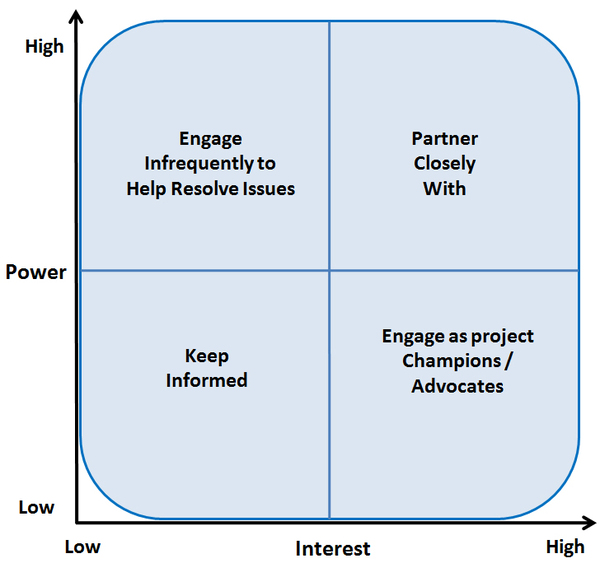 Yet, this is a minor quibble, I like the idea of the matrix and I am sure it will help me characterize stakeholders on projects.

I'm glad to see PMBOK and Agile being perceived less and less as mutually exclusive.

Excellent! This article is a breath of fresh air. I have been doing Agile for years and just started working through PMBOK. While I took note of progressive elaboration I also couldn't help but notice that "agile" is not found in the index, nor alluded to anywhere that I saw. My experience has been consistently Agile vs. Project Managers and I'm pleased to see rational thinking about the merits of both. Thank you