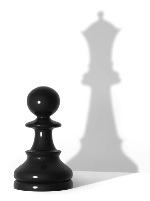 Last night I gave a talk on “Agile Project Leadership” at the Calgary Agile Methods User Group (CAMUG). I like giving these because the questions raised make me re-examine elements of leadership and last night was no exception.

One question raised was basically “We hear about these ideas and they sound good, but in our projects the same old stuff keeps happening. How do we get real results?” I responded with some explanation about encouraging servant leadership, but in retrospect I think the underlying question was more about making the switch to authentic leadership rather than shallow imitations that bring poor results.

Some subsequent discussions with a couple of attendees have helped me straighten out my thoughts on the issue further. “Cargo cults” is the term used to explain the phenomenon of blindly replicating outward behaviour with the hope that it will yield positive results. It originates from a few scattered instances of Pacific Island tribes recreating replicas of the war time aircraft runways, control towers, and radios out of wood in the belief that they would bring back the cargo planes that brought Western goods during the war.

The equivalent cargo cult leadership pattern would be to practice techniques like team recognition in the hope that it improves morale and productivity without understanding the work undertaken, or by presenting phony “well done’s” and insincere praise. People have excellent BS radars and phony praise is quickly recognized as attempts at manipulation and has the opposite effect as desired. Likewise mechanical-only attempts at creating a common vision, challenging the process, or creating empowered teams will fall short too. These activities require deep conviction or else they will falter and fade, making genuine attempts harder to introduce later as an “antibody effect” of mistrust develops in the team.

A quote I like on the subject is that “Leadership can not be taught, but it can be learned”. This addresses the idea that people have really got to buy-into the benefits of leadership for themselves in order to grow and be effective. We can teach most people mechanical techniques like estimation and risk management best practices, but when it comes to the humanistic based techniques, they need to be embraced and believed by the practitioner to be effective.

So how do we get this to happen? When I’m feeling lazy I am tempted to revert back to the idea that we should just focus on the people who “get-it” by mentoring and supporting people willing to absorb these ideas and leave the skeptics to their own self-limiting environments. Getting the “right people on the bus” certainly has its place, but as leaders we also have a duty to help develop the best from our team members.

Another attendee last night pointed me to the book “Powerful Project Leadership” and the quote “Managers use people to accomplish work; leaders use work to grow people”. I like this a lot. My take is that we have an obligation to lay an appealing trail of breadcrumbs to lead people along the path of figuring-out stuff for them selves.

What the breadcrumbs look like and where they go depends on the skills and needs of the person, but a reasonable starting process would be:

For reluctant team members the process will be slow to start as responses of “Nothing” and “Nothing” to the first two questions are hard to build on. However, with some creativity and knowledge of their roles some mutually agreed to development areas, even if very small, should be possible to identify.

Not everyone wants an aggressive development program; sometimes people have enough change in their lives that work is their last vestige of sanctuary. However, most people recognize they should not stand still for long and a development plan will not only help with their career development, but is a tangible example of investment in their welfare by the organization or team.

So while I still believe this leadership stuff needs to be truly believed to be grasped and used effectively, I hope there are ways we can assist with the learning process to help people get there quicker.

Great post. I see the 'Cargo Cults' all the time in my work. Organizations mistakenly believe that if they implement a framework/methodology (e.g., PMI, Prince, ITIL) everything will work just fine.

Maybe it's a stupid question but I have to ask :)

If you apply the "grow people" tactics, aren't you increasing the risk of having your team abandon you? When the team grows and gets better they also have the opportunity to earn more. And if your company cannot pay more they'll try to earn more in another company. How do you deal with this kind of problem?

I agree with everything you say but just can't see clearly how to implement it correctly...

What do you think about it?

All the best,
Guilherme Chapiewski

Yes grow them, help them gain all the skills they need and can absorb, make them all better leaders and managers than yourself and a whole bunch of them will leave. You will have to start again with new people, but you are now playing in a much larger, more important game.

These people will move onto bigger and better things with you as their enablers that they will not forget. In 5 years time I might be working for someone I helped along somehow. It may sound a bit cosmic, but you create upward spirals of appreciation and attract better people to work with because the word spreads.

Call it karma or a calculating personal growth plan, but by making others successful you will ultimately become more successful than focussing on yourself. Third parties are more credible character references about us than we can be, and there are way more of them!

I know your question probably focussed on the concerns of loosing people if you trained them, but I think that is not necessarily a bad thing, at least in the long run.

Yeah, I have to agree. In the long run it seems to be rewarding.

Actually I'm facing new professional challenges and I'll try to apply this "philosophy" in my way of managing/leading.

Thanks for the answer :)

All the best,
Guilherme Chapiewski