The Rise, Fall and Rediscovery of Agile Methods 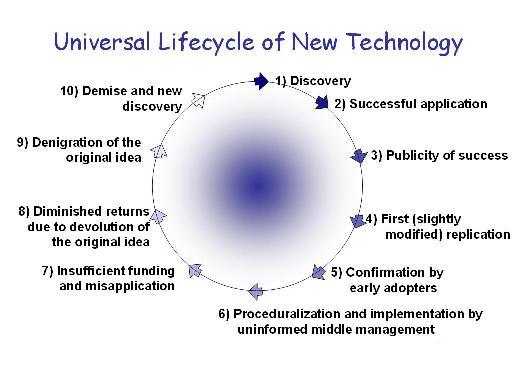 The rising misapplication of agile methods and the trend of everyone claiming to be “agile” is probably a good indicator that agile methods have well and truly crossed the chasm into the mainstream. I wrote the attached “Crossing the Agile Chasm” paper in 2002 and it was published in the Agile Times in 2003. At that time agile adoption was predominantly the realm of early adopters, keen to understand and adopt new techniques.

With the adoption by the majority segment we see a different usage pattern including “me too” and “panacea seeker” (faster, cheaper, and easier) groups in addition to well intentioned users. Vendors are keen to cash in too, and we see “agile-this” and “agile-that” tools and product descriptions as they jump on the band wagon.

While this may seem a sad trend and a threat to agile methods as they are increasingly misapplied, watered down, and then criticised when project fail. It is nothing new and just the logical next step in Sarah Sheard’s “Universal Technology Adoption Lifecycle” (pictured above). The lifecycle has the following phases:

1. Discovery – the new approach is pioneered and worked through to find a solution in the original setting. In the agile world this happened for each methodology. The Borland Quattro Pro project was the inspiration for several methods.

2. Successful Application – Methods are used with enough success to convince the originators that it is reliable and applicable framework. For instance the Chrysler C3 project for XP, the Easel for Scrum, the Singapore project for FDD, and the ECGD project for DSDM, etc.

3. Publicity of success - The technology or approach is publicized by the organizations and technology creators internally and externally. For instance the first XP and Scrum books emerge.

4. First (slightly modified) replication – Authors and fast-followers try the approaches, modifying them if necessary, but crucially, paying close attention to the original intent of the approach and often working in close collaboration with the initial team members. These were the early projects in the late 1990’s when agile by name still did not exist and the methods were below most people’s radars.

5. Confirmation by early adopters – The early adopters succeed and rightly trumpet the benefits of the new technology/process. For agile this has been a long stage as many thousands of companies and projects have adopted agile and found benefits.

6. Proceduralization and implementation by uninformed middle management – In some organizations the process is adopted and swallowed up by mis-aligned procedures. What was meant to be a flexible, light touch, becomes a cookie-cutter process applied with little regard to the context it was intended for.

7. Insufficient funding and misapplication – Just because a process or technology can save money when used well, it does not automatically follow that it will somehow miraculously rescue doomed projects, impossible deadlines, or under estimated confusions. Unfortunately when faced with a tough problem, the promise of the latest great-thing can become an appealing solution. However, no process can bend the physics of time or budget, some endeavours are just poorly conceived. Unfortunately, agile is sometimes seen as the solution to a wayward project and applied (usually poorly) in an attempt to compensate for insufficient funding (with predictable results.)

8. Diminished returns due to devolution of the original idea – As a wider population of majority companies begin to adopt new technologies/approaches they do so with less regard and consultation to the original creators and guidelines. An “everyone seems to be doing it so how hard can it be?” mentality seems to appear in the majority groups that is not as prevalent in the earlier adopters. With this comes erosion of the original values and ideas. In the agile world we see “agile in name only” projects claiming to be doing agile, but really just working without documentation. Not the same thing at all.

9. Denigration of the original idea – As more and more of these misapplications of the approach fail, criticism of the approach rises. Failed instances are held up as “proof” of the technology/approach’s shortcomings by competitors and sceptics. The good name and original successes are called into question and mixed messages spread throughout the community.

10. Demise and new discovery – Like fashions, most new approaches decline in popularity only to be revised with a slight twist a few years down the line. There will be some die-hards who continue to follow the approach and the encouraging thing is that these are usually the people who adopted it more completely and convinced themselves by its benefits. The wave of hangers-on however, who were there to cash-in and follow-suit will be off onto the next new thing (which they will probably screw up too).

Obviously, the software industry is a complicated ecosystem that can not be readily reduced to a 10 step model. Where models can help though is by creating an easier to understand view of trends in the market and help identify patterns that can be useful to us. So while we can not point to an individual phase step and say that, as on February 8th, 2007, the software industry is at step X, we can identify movements in the market and predict what may happen next.

Individuals and organizations move through the cycle at different speeds. Cycles also overlap and merge, the Rapid Application Development movement of the 1980’s and early 90’s went through this cycle and got a bad name as being synonymous with hacking while its origin, pioneered by James Martin, was nothing like hacking. Many of the iterative incremental elements of RAD were reborn into agile methods. Other approaches have been through the cycle too. The originators of CMM cringed as they saw how it was abused by the “process police” of consulting companies – this was never their intent, it was misapplied, devolved and denigrated beyond their recognition.
So, is history set to repeat itself with agile? I expect so, but it is likely to take another 4-8 years in my estimation. Hopefully by then the good practices will be ingrained into common work methods and will propagate into the next emerging trend. Until then we can come to expect more and more misapplications, but don’t take it personally, it is a natural growing pain!

This post is not meant to sound too negative, the fact that people start suing Segway because they are falling off scooters, or suing McDonalds because they get fat, is a great sign that you are reaching the masses, just what the agile community wanted by promoting these methods.